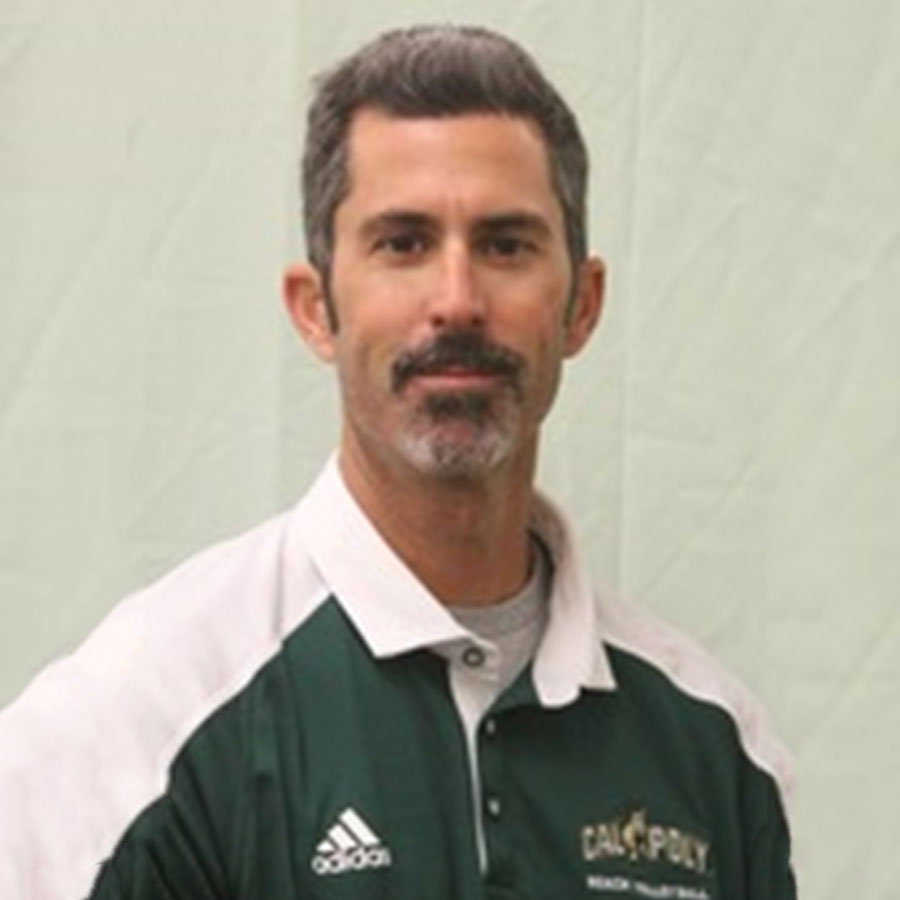 Going into his eighth season as head coach, Todd Rogers was hired as head coach of the Cal Poly beach volleyball program in February 2016.

In 2022, Rogers coached the team to its third straight Big West title and NCAA Tournament appearance. He led the program to a 23-17 record and an AVCA ranking as high as No. 8 in the country and never lower than No. 14 the entire season. The Mustangs collected six wins over fellow ranked opponents throughout the season and went 4-0 at the Big West Tournament to win a Big West title in front of their home crowd at Swanson Beach Volleyball Complex. Rogers also saw three pairs named All-Big West and the program’s first player to be named Big West Freshman of the Year in Ella Connor. Under Rogers’ guidance, Connor and Tia Miric were named First Team AVCA All-Americans. In addition, Rogers was named Big West Co-Coach of the Year, winning the award for the third straight season.

In 2021, Rogers directed the program to its second straight Big West Championship and NCAA Tournament appearance in addition to the program’s first NCAA Tournament win. The team finished with a record of 24-11 and reached an AVCA ranking as high as No. 5 in the nation and was ranked no lower than No. 6 the entire season. The team made history at the NCAA Tournament in Gulf Shores, Ala. by winning the program’s first NCAA Tournament match after a 3-2 win over Stanford on May 7. During the season, the Mustangs won 13 matches against other ranked opponents, including No. 6 Stanford, No. 8 Pepperdine, No. 9 Cal and No. 10 Hawai’i. Following the season, Cal Poly had four pairs who were named All-Conference including Emily Sonny and Macy Gordon who were named Big West Pairs Team of the Year and AVCA First Team All-Americans. Rogers also was named Big West Coach of the Year for the second straight time.

Rogers guided the program to its highest point in 2019. The team finished 25-12 while winning its first Big West Championship in program history and qualified for its first appearance in the eight-team NCAA Championship in Gulf Shores, Ala. The Mustangs also reached as high as No. 6 in the AVCA Top 20 rankings while being ranked in the Top 10 the entire season, and saw them win 12 matches against other ranked opponents. Three of those wins came against Hawai’i, which were the first wins over the SandBows in program history. Followng the historic season, the awards started flowing in. Rogers was named Big West Coach of the Year for the first time, senior Crissy Jones and sophomore Tiadora Miric were named Big West Pair of the Year after going 22-8, and five Mustang pairs received All-Conference honors. Jones and Miric were also named AVCA Beach All-Americans.

In 2018, The team finished 27-7 and received its highest ranking in program history at No. 4 in the nation at one point. It was the first year in the history of the program that the team finished with a record above .500 and was highlighted by a win over No. 2 Pepperdine, the highest-ranked opponent the Mustangs have ever beat and a 14-match winning streak where the team beat five teams ranked inside the AVCA Top 20. Rogers also coached the pair of Torrey Van Winden and Tiadora Miric to a championship in the Big West’s first-ever Pairs Championship tournament. He also coached the Mustangs’ No. 2 pair, Emily Sonny and Samantha Manley to the most single-season wins in program history with 29.

Overall, Rogers has coached six players who have been named AVCA All-Americans and has had 14 pairs earn All-Conference honors.

Rogers’ position with the Mustangs marks the Olympian and gold medalist’s second stint in coaching, with Cal Poly being his first in a head coaching capacity. Rogers served as an assistant for the UC Santa Barbara men’s indoor volleyball program from 2000-05, during which time the Gauchos won over 50 matches.

Rogers, the 1997 AVP Rookie of the Year, captured a gold medal in beach volleyball at the 2008 Beijing Summer Olympics. He was named the AVP’s Most Valuable Player in 2007 and Best Defensive Player for five consecutive seasons from 2004-08.

In addition to Rogers’ aforementioned accomplishments, he also earned the AVP’s Most Valuable Player honor in 2006 and alongside his playing partner, Phil Dalhausser, was named the AVP Team of the Year in both 2007 and 2008.

In 2007, Rogers and Dalhausser completed the AVP season with more than 800 points over the second-place team, which included 10 tournament victories. During the same year, the pair won the Fédération Internationale de Volleyball World Championships in Gstaad, Switzerland, which was the first such victory in U.S. Men’s Beach Volleyball history.

While paired with Dalhausser, Rogers won nine events (eight with the AVP and one with the FIVB) in 2006. He also captured the season-ending round robin individual tournament where he earned the title, “God of the Beach.”

For three consecutive years (2006-08), Rogers earned the FIVB Best Defensive Player of the Year honor, while being voted as the FIVB’s Most Inspirational Player in 2008. He was also honored with the FIVB’s Best Setter award in 2005.

Rogers competed on the AVP Tour during the 2015 season and finished in a tie for third place (alongside Stafford Slick) with Casey Jennings and Billy Kolinske (540 points). Rogers and Slick finished the 2015 AVP Tour season with the fourth-highest team points total with 2,570.

Rogers attended San Marcos High School from 1987-91 and UC Santa Barbara from 1993 through 1996. As part of the Gaucho men’s volleyball program, Rogers was twice named a Second Team All-American by the AVCA in 1995 and 1996.

Rogers’ head coach at San Marcos High, Jon Lee, originally turned him onto beach volleyball as a way to stay fit for the indoor volleyball season.

Rogers – who earned the nickname, “The Professor” – was inducted into the International Volleyball Hall of Fame in 2021 as well the Santa Barbara Athletic Round Table Hall of Fame for his achievements in the sport of indoor and beach volleyball. He enjoys surfing in his down time.

Rogers has been married to Melissa Masonheimer-Rogers for over 25 years and has two kids: Hannah, a 2022 Cal Poly graduate, and Nate.