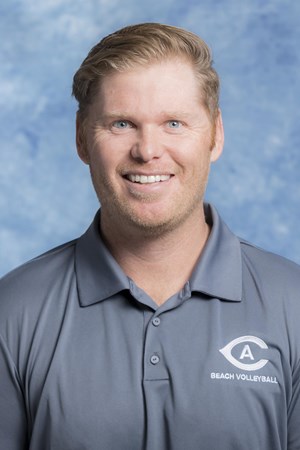 After serving as the founder and director of the Viper Beach Volleyball Club in Temecula, Calif., since 2016, McColloch joined the UC Davis staff prior to its first season of competition in the fall of 2018, helping build the Aggies’ program from the ground up while also serving as a volunteer assistant with the Aggies’ indoor team.

He began his coaching career with the Encinitas Wave from 2008-14 and helped grow the ISPE beach program at WAVE Volleyball from 60 to over 120 athletes during his time.

Growing up playing on Moonlight Beach in Encinitas, McColloch played indoor for the Seaside Volleyball Club for Head Coach Fred Featherstone and attended Palomar Junior College for two seasons before transferring to Holy Names University in Oakland, Calif., where he went on to earn a pair of all-conference awards in 2005 and 2006.

He went on to play one season of professional indoor volleyball as an outside hitter for Asse-Lennik in Belgium in 2007, before returning to the beach as a professional in 2008, posting his best-ever tournament finish — second place — in Siesta Key, Fla.

Along with his partner, Roberto Rodrigues-Bertran, McColloch also became part of the first No. 16 seed to beat a top-seeded tandem on the AVP Tour when they defeated Olympians Jake Gibb and Casey Patterson en route to a fifth-place finish in Seattle in 2016. He was also part of an upset of second-seeded Phil Dalhausser — a 2008 Olympic gold medalist — and Sean Rosenthal as the No. 10 seed at an AVP Championship event in Huntington Beach, Calif., in 2013.

All told, he has 13 top-five finishes — and 31 among the top 10 — to his credit as a professional beach player.