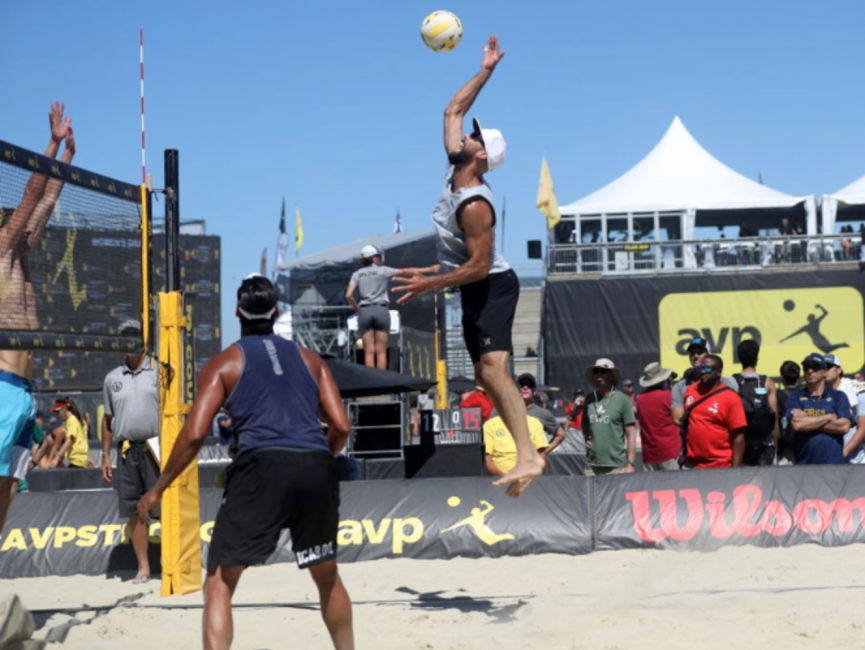 “Most people believe that an improved jump by itself will translate into more effective hitting. Hops help but a more impactful focus on would be to develop great footwork.” Reid Priddy, 4-time USA Men’s indoor Olympian and current member of Team USA Beach

Beach volleyball has so many added distractions vs. indoor volleyball such as sun, wind and weather conditions. While beach is fun, the sand slows you down and is a great equalizer for players of different size. Sand absorbs energy a lot more than a harder surface and helps athletes with better technique make up for a lot of differences in height.

Simply everything you do on offense starts with a pass and requires excellent footwork to get you into the right position to attack the ball consistently. Footwork allows you to stay behind the ball and to become a great beach attacker. The right attacking position has the ball slightly in front of your body and in line with your hitting shoulder. Developing a good arm swing and being able to see where you are hitting the ball is dependent on good footwork.

Beach Nation reached out to 4-time USA Men’s indoor Olympian Reid Priddy and now part of Team USA Beach to give you some of the footwork changes he found necessary to continue his offensive success to the beach game. Why? Because Reid found the footwork transition from indoor player to professional beach athlete a key challenge to be successful as a sand player.

Reid found himself passing and then stepping out away from the setter and that caused him to broad jump to the ball. Trying to use his indoor footwork instead of beach footwork made getting to the ball a lot more difficult, which made using the entire court as an attacker much more challenging.

Footwork starts just after serve receive. Our passing goal is to pass in front of us and slightly towards your partner. To give your partner time to set the ball – the pass should be just over the height of the antenna and be about 5’ off the net. When attacking, we want to have the ball 1 ball’s distance in front of your hitting shoulder, be able to max jump straight up, not broad jump, and to see and hit the ball effectively. Below look at the spacing of the ball in front of Reid’s shoulder and he is jumping straight up, not broad jumping.

The approach for your 4-step footwork is right, left, right left for a right-handed hitter and reverse for a left-handed hitter (L,R,L,R). That is the easy part! We want each step to be faster than the last step so that we increase our speed to the ball which is another way of saying we want to build energy that we can use when we finally hit the ball. Each step is longer and faster than the prior step with the last step being the longest and fastest ending with your feet pounding the sand straight down – compressing the sand which allows you to jump straight up.

The purpose of our footwork is to get you to the ball at the right time, get you to the right place so you can hit the ball, and do this as efficiently as possible. Remember; see the set first and then start your approach so you can accelerate and keep the ball in front of you.

The first step, or “the timing step” is the smallest step and following the ball so you can get closer to the setter and have an easier line into the set. With your first step you watch the setter and the ball while adjusting your body with a small step to get into the right alignment with your setter.

The second step is the “power” step. This step is longer, you really start to move fast as you drive to the ball. The ball is still 2 steps front of you, the ball is still going higher and that you have seen where it is going you are accelerating aggressively towards that spot where you will attack the ball.

The third and fourth steps are when you plant your feet and pound that sand straight down. You hop into that plant; your feet are a little behind the ball and you jump, pounding the sand. These last two steps are pretty much simultaneous steps and are the fastest steps of your approach as you drive into your final attack position with the ball in front of your hitting shoulder. Effective attackers get “feet to ball” / consistent ball to body, which will help your shoulder to work easier and have a faster arm swing and keep you from getting under the ball.

See you at the Beach!