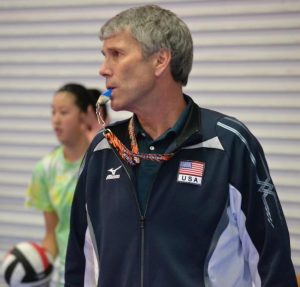 Beach Nation, the leader in beach volleyball education, coaching players and coaches, is honored to name John Kessel as part of our coaching and leadership team. After 30 plus years with USA Volleyball, John will now help guide Beach Nation’s transition from beach athletes and coaches to now include doubles volleyball on grass as well.  John remains heavily involved in the FIVB, NORCECA, World ParaVolley, US Center for Coaching Excellence, Starlings Volleyball USA, and learning and teaching volleyball in less traditional areas to grow the game and facilitate opportunity. Beach Nation will follow his lead on these and other focus areas.

John is known for his coaching innovation through positivity, motivation, incorporating motor learning with cognitive development and keeping learning fun. Until a few weeks ago John served as USA Volleyball’s director of sport development.  Kessel has “strived to help all coaches become more efficient, positive and creative, no matter what level – from the elementary school level to USA National Team programs”.  We are now thrilled to have John add his leadership as Beach Nation teaches players and coaches across all talent levels with elite curriculum, technique, attention, making learning and to further develop beach and sand coaching for coaches. He is an author of over 12 USAV books, including the IMPACT coaching manual (now in its 33rd edition), the Jr. Olympic Volleyball Program Guide, and  Minivolley 4 Youth . His blog called “Growing the Game Together” is the second most popular blog of the hundreds found on the US Olympic Committee’s Team USA website. He is an administrator of the nearly 22,000 closed membership Facebook page “Volleyball Coaches & Trainers”.

Here are just a few of John Kessel’s highlights:

To learn more about the International Volleyball Federation, visit www.fivb.org

To learn more about the US Center for Coaching Excellence – www.uscce.org